Is it just me, or has the Bob Dylan + Wilco + My Morning Jacket summer concert tour, aka Americanarama, not gotten nearly the attention it deserves? 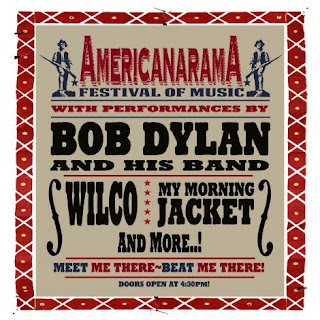 I think it’s because Bob Dylan is on the top of the bill.

Don’t get me wrong: Bob Dylan is a genius. In the 1960s, his music and lyrics were innovative and revolutionary. Amazingly, he’s managed to remain culturally relevant for nearly 50 years.

That being said, Dylan isn’t what he used to be. Honestly, I don’t know how good the Bob Dylan live experience was before 1995, but I’ve seen him several times in the last 18 years and every show has left me wondering, “Why doesn’t Bob Dylan want to entertain his fans?”

The Toronto chapter of the cult of Wilco was sufficiently numbered to fill the 2,750-seat Massey Hall for a couple of nights on the band’s tour behind The Whole Love in September of 2011, after all, and My Morning Jacket’s local following by now easily tests the bounds of a 2,000-plus venue such as Kool Haus.

A conservative estimate would, thus, peg the potential Toronto audience for Americanarama at least a good one-third of the amphitheatre’s 16,000-person capacity before Bob Dylan, the 72-year-old living legend and headliner around which the roving mini-festival is built, even entered into the picture. Dylan, one would think, should top that crowd up nicely.

Instead, he succeeded in thinning the ranks in much the same way he cleared out a substantial amount of the crowd at the Air Canada Centre during his last tour stop in Toronto last November — by bloody mindedly playing the crank and serving up an uncompromising mix of rambling recent numbers rendered in the jump-blues vein and thoroughly (read: almost unrecognizably) worked-over catalogue standards such as “A Hard Rain’s A-Gonna Fall,” “Blind Willie McTell” and a set-concluding grind on “Blowin’ In the Wind.”

Oh well, I can’t say I’m surprised. Nevertheless, I’m excited about seeing Wilco, My Morning Jacket and Richard Thompson at Shoreline Amphitheatre this Sunday. Should be fun. But I can’t guarantee that I’ll stick around for all of Bob’s set.

And who knows, maybe Bob Weir will make a guest appearance…

The best band in the world at the peak of their power: Radiohead live at The Hospital Club’s TV Studio in London