My wife bought me the Ion Audio Tailgater Portable PA System for iPod for Christmas. Wow! It looks like a guitar amp, but it’s really a kick-ass, portable party machine.

The Tailgater has an iPod dock, gets about 12 hours of playtime when fully charged and includes two jacks, so you can plug in microphones or an instrument.

We’ve used the Tailgater on the beach and at parties as a karaoke machine.

I have plans to buy a bike trailer so I can use the Tailgater as a mobile DJ station. You’ve got to admit, it would sure beat this guy’s rig: 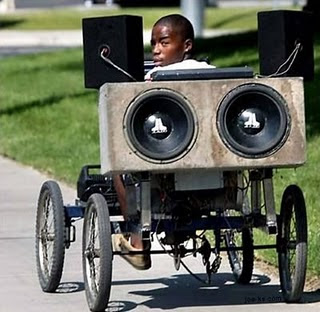 Free online games? […]First of all I want to say excellent blog! I had a quick question which I?d like to ask if you do not mind. I was interested to find out how you center yourself and clear your thoughts prior to writing. I have had difficulty clearing my mind in g? 250gb is the Best External Hard Drives

Rolling Stone: Singles of the Year 2010

The One Music App/Service Every Festival Freak Should Use