Write down the first 15 albums you can think of that had such a profound effect on you they changed your life or the way you looked at it. They sucked you in and took you over for days, weeks, months, years. These are the albums that you can use to identify time, places, people, emotions. These are the albums that no matter what they were thought of musically shaped your world. When you finish, tag 15 others, including me. Make sure you copy and paste this part so they know the drill. Get the idea now? Good. Tag, you’re it!

When I was tagged in this note by my friend Joe, I resisted looking at his list, to avoid being unduly influenced. Good thing I did, because his list was interesting.

While none of those albums “changed my life,” several of these artists did. I included other albums by Rush and Radiohead in my 15 and would have included albums by U2, The Cars, Pink Floyd, Led Zeppelin, The Cure and The Rolling Stones if the list were 30.

Here is what I came up with, without giving it too much thought: 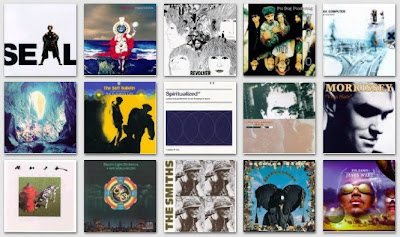 Two days after making it, I think it’s a pretty good list. It reflects my musical preferences and personal attachments to particular albums. My list, and others which friends have posted, make me realize that music is especially powerful when you’re a teenager and young adult, a time in life when music still has the power to transform and inspire you. I’d like to think that it still can.

I’ve created a Pandora station seeded with my 15 artists above (“15 Albums That Changed My Life”). I hope you enjoy it.

I enjoy following you on emusic and here. I trust you are readying for Coachella. I envy you.

Friend, I cannot help, but wonder that there is not a single female voice on your list. Julian Cope speaks for Mother Earth (and surely many women) On Peggy when he asks what does it take to go down on someone that you hate? And I don't think any of your albums can claim a misogynist voice (a rarity in itself) though I can't claim familiarity with all your albums. But surely, there has been one or was it part and parcel of being that age?

Thanks for the comment, Oliveme. Am I following you on eMusic? Ping me at [dan at festivalfreak.com] and we can connect.

I won't be attending Coachella this year, but I will be going to Bonnaroo, Outside Lands, Hardly Strictly Bluegrass and Austin City Limits.

I didn't intentionally exclude women from my list, it just worked out that way. I love women artists and vocalists, but honestly, I do tend to gravitate to the male voice. If I had to choose just one as my favorite, it would be Richard Ashcroft's.

Now you've got me thinking of my taste and what it means.

DIngo- I can't figure out how to follow you on emusic. At any rate, know you are at Bonnaroo. I have festival envy. Patti Smith Horses. Tracy Chapman Tracy Chapman For You. Hole Live Through This.

Anyway, wanted to drop you a line and say I appreciate your thoughtful and thought provoking blog entries. The immediacy of Twitter and its interconnectedness have me a bit overwhelmed. Plus, I am more of a personal conversation person than a broadcaster. Maybe I am just not familiar enough with the technology. Maybe I I don't have enough confidence to to assume that whatever shit I have to say has as much right to bandwidth as whatever shit anyone else is saying. Anyway, Twitter is being overwhelmed by the World Cup. Take care and enjoy the show Friend.

Bonnaroo was fantastic! I'll be posting some thoughts on my four days in Manchester, TN later this week.

Btw, you can follow me on Last.fm at http://www.last.fm/user/GreenDan